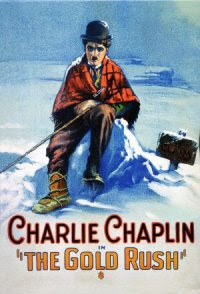 THE FILM:
I'm currently considering how many of Chaplin's many wives he did not meet through one of his films. I understand that he met one of them in The Kid, he met another is The Gold Rush and he would later meet another one of his wives in Modern Times. The original actress hired to play Chaplin's love interest in the film was, Lita Grey, who would become Chaplin's wife. Lita Grey was later removed from the film for unannounced reasons. Although, there are still a few photo stills of her in the role, all of the actual footage has most likely been lost. The character in The Gold Rush was replaced by Georgia Hale.

There is a classic scene in The Gold Rush where Chaplin and his acquaintance  Big Jim as starving to death, and so Chaplin roasts his shoe and the two of them eat it. This sequence took three days to shoot and 69 takes in order to satisfy Chaplin unique directorial vision. Since Chaplin was not about not actually eat a boot, therefore, he made one out of licorice and cake. At one point, Chaplin had to be rushed to the hospital for an insulin shot. This demonstrates the lengths which Chaplin would exceed to simply create a masterpiece.

Not only was this a very popular film at the time - in fact it was the fifth most successful (money making wise) silent film of all time. Chaplin later claimed that it was the film he wanted to be remember for. I personally consider this to be the film which Chaplin best demonstrated his physical humour, but not his best film. It may be his funniest, but overall - not his best.

Where does The Gold Rush stand today? Many consider it to be Chaplin's best. Later on in 1942 when he re-released the film taking out the title cards and replacing them with narrations, the film was nominated for a sound editing Academy Award. If you want to watch this film, which I suggest you do - watch it on The Criterion Collection, which is the best print ever made of The Gold Rush. The film currently holds an 8.2 on IMDb and a 100% on Rotten Tomatoes. Be sure to check The Gold Rush out sometime, it is without a doubt among the greatest silent films ever made.

THE PLOT:
A lone prospector stumbles into the cold searching for gold. He follows the path of many others until he arrives in a small cabin with two other prospectors. Starved by the toll of hunger - one of them leaves, leaving the Lone Prospector alone with Big Jim. They soon find food and part ways. Big Jim finds gold, but then bumps his head and forgets it's whereabouts. Whereas the Lone Prospector goes to a small town where he falls head over heals in love. Where the Lone Prospector be with the love of his life? And will Big Jim succeed in his quest for wealth?

THE CRITICISM: (THESE SPOIL SOME OF THE GREATEST MOMENTS IN THE GOLD RUSH)
Yes, as I mentioned earlier, The Gold Rush is the greatest film to witness the physical genius of Charlie Chaplin. But The Gold Rush contains more than just physical humour, in fact, it consist of four of the great Chaplin moments... ever.

1. Big Jim thinks Chaplin is a giant chicken:
There's a moment in the film that Big Jim is so hungry, that he proceeds to have visions of Charlie Chaplin's character as a chicken. This moment in the film is hilarious as it is so bizarre. The chicken costume is fairly cartoon-ish, which is a definitive benefit to the film's style of humour. As Chaplin flaps his wings and roams around the compound of the cabin, the look of hunger of Big Jim's face is certainly enough for a few big laughs.

2. Chaplin roasting his shoe:
Yes, here's another classic Chaplin moment. To cope through their hunger, Chaplin roasts one of his shoes and shares it with Big Jim. Seeing Chaplin serve the shoe like common food will certainly put one into hysterics. I laughed out loud the first time I saw Chaplin twirling the shoe laces as if they were spaghetti.

3.Chaplin and the dinner rolls:
The first time I saw Chaplin's classic dinner roll scene was the critically underrated film Chaplin directed by Richard Attenborough. When I saw The Gold Rush for the first time, (which was after watching Chaplin) I was stunned to see that it was actually something Chaplin had done in one of his films. Johnny Deep also replicates this in Benny & Joon. The reason for all of these replication is because it is sheer genius. The scene itself takes place during dinner, and Chaplin is entertaining a few girls. He then sticks two forks into two dinner rolls and proceeds to swing them around - pretending that they're legs and feet. It's something that cannot be described, so I have posted the video on the side. Be sure to check it out, because it is one of the funniest silent comedy scene ever.

4. The cabin hanging from the cliff: 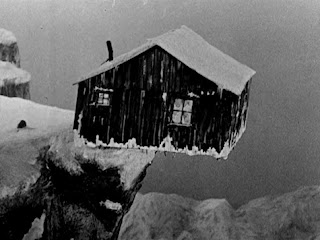 At the end of the film, when Chaplin and Big Jim are searching for the gold, and their cabin blows off in the middle of the night. The image of the cabin hanging off the edge of the cliff is enough of a sight gag to give you a chuckle- but seeing Chaplin and Big Jim trying to understand why the cabin keeps tilting when they cross onto the either side is when The Gold Rush gets even better. I won't say much more about this scene especially because it's at the very end of the film.

The Gold Rush re-defined the definition of comedy. You can enjoy Chaplin historical comment on the male need for wealth, but in watching it - you don't take what Chaplin says about looking for gold back with you. You take the jokes back with you.