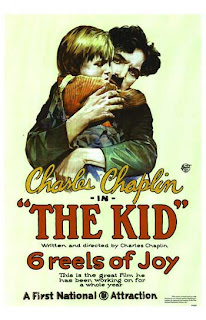 This film is now in the public domain. You can watch the entire film, as I did here (although watching it on a DVD copy is always far superior).

THE FILM:
The Kid was not only Charlie Chaplin's first feature film, but it is considered to be the first film to truly combine comedy and drama. As the first title card in the film reads "A picture with a smile-and perhaps, a tear". There is no doubt, that this is Chaplin most melodramatic film, but there is definitely doubt that it is not Chaplin's funniest picture.

The Kid transformed an average kid, Jackie Coogan, into the first child star on the big screen. Coogan plays the title role, and Chaplin was very specific about who he wanted. You see, The Kid was a very personal film for Chaplin. Directly before production of this film began, Chaplin's infant child died. This was quite tragic and it had it's toll on Chaplin. He still was able to make a good film, and it was probably better because it was more personal. Maybe he know understood his role, as a man with a bond between a kid.

There's a scene when Chaplin and Coogan are sent to the workhouse in The Kid. Coogan being young, was not able to cry when his character was supposed to. So Coogan's father approached his son and threatened to actually send him to a workhouse if he didn't cry. Guess what? It most certainly worked! 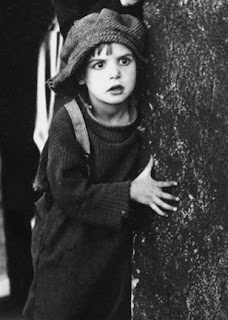 After Chaplin finished The Kid, the production company tried to cheat him. Unlike today, the company had a very strict payment plan. They would pay you on the amount of reels your film was in length. The Kid was a six reel long film, yet the company tried to pay Chaplin the amount of a two reel long film. This meant they were to pay Chaplin half a million dollars, when he was supposed to receive one and a half million dollars. If it were me, I would have accepted the half a million dollars! But Chaplin refused to release the film until he was properly paid. Eventually the studio caved in and gave him his one and a half million dollars.

Just to make matters worse, while shooting this movie, Chaplin was in the middle of a divorce. However, he met his future wife on the set of the film.

THE PLOT:
A woman leaves a hospital, holding an infant child within her arms. Her face is filled with sorrow as she deposits the child inside a limo leaving a note. She then goes off to commit suicide. Two robbers enters the limo and are stunned to find a child there! They dump the child in a trash can and continue on their way. In walks The Tramp, who finds the child and, trying to avoid any responsibility tries to pass the child over to other people. At the end of the day, he is stuck with the Kid.

Here we are, five years later. The Tramp and the Kid are still together, however they're both five years older. They have a genius plan to work together in a business  The Tramp becomes a window repair man, and the Kid spends his days throwing rocks at people's windows so The Tramp can be paid to repair them. 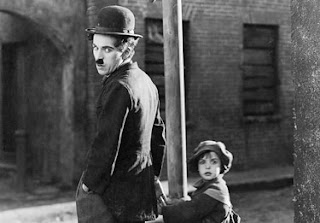 All is going well until the Kid's real mother comes into the picture. Remember the lady who planned to commit suicide in the beginning? She didn't really. Now she's a famous opera star who works with children in the hopes of finding her son. Grief fills her mind, and it is replaced with astonishment one day when her son is tracked down. However, this means separating him from his rightful parent, The Tramp.

THE CRITICISM:
The humour in The Kid has never worked for me. There's something about throwing children into trash cans and throwing them at people that never tended to amuse me. However, later on, humour is replaced by a sort of 'cuteness'. For example, the relationship between the Tramp and the Kid is very cute and sweet. We are expected to have a smile on our face from watching this. The Kid doe however, expect a little bit too much of it's audience.

Chaplin is truly a great actor. I won't begin to comment on how well he uses his body to demonstrate different emotions and the cleverness of his body language. However, it is put to waste a little in The Kid because we aren't supposed to laugh half as much. Although we still get to see Chaplin do some great original sequences using his great talent in physical humour. The Kid dwells too long on such sequences as one when a man proceeds to try to punch the Tramp, but he keeps ducking. This lingers on for much longer than I could possibly hope. Such a fight scene as this was shown in City Lights, except there it was preformed much better than it is here.

The Kid is a very kind and innocent film. I would not consider it to be his sweetest, when it comes to that, City Lights gets the cake. The Kid only works if you can not only understand the connection between the Tramp and the Kid but sympathize with it. I could understand their relationship, but I failed to truly sympathize with them. Perhaps the reason for this is because of what I mentioned earlier in the beginning of the film. When you want us to sympathize with your character, you must set this up from the very beginning of the film. Chaplin, does not. When we first see him, he is trying to hand this child over to random people on the street, and then running away. Not only is that not funny, but how on Earth are we supposed to like the person afterwards? Thank goodness this doesn't last on into other Chaplin films were the Tramp is constantly likable.

Finally, I would like to comment on the fact that the ending is incredibly aggravating. There is a dream sequence that seems as though it was the easy way out of doing a happy ending. The film ends very mellowly because of this.

The Kid is not a bad film, but it's not all that it is cracked up to be. Ultimately it is a very mild Chaplin film with overly overt attempts at being sweet.